Here’s something for you Vin Packer fans!

ADDED September 2012: When available, under each Vin Packer cover is a review written by Vin Packer herself and originally posted on Amazon and re-posted here for our readers. Enjoy! Also, each e-book has a new cover but they are not posted here. These are the paperback covers. Vin Packer is pleased with the new designs though so enjoy looking at them at Prologue, Amazon, Barnes and Noble and wherever Vin Packer e-books are available!

Comment by Vin Packer: The Packer books were published in the 50′s and 60′s, very often with top reviews from both the NYTimes Sunday crime columnist Boucher, and the Sunday Tribune columnist, Sandoe. Amazon did not allow me to use any of these quotes in my discussion of their content. Who remembers crime stories from 50 years ago but the author? I gave those books well-reviewed 5 stars, the only way I could signal their interest minus critics’ approval. Some that were not reviewed (most paperbacks were not) I gave less stars. When books from long ago are presented to the buying public, it does not seem to me fair not to allow opinions held by authorities of the time. I think it’s better than having friends write raves and give stars. VP

One of the things I love about this book is its depiction of sorority life. That is the real story here: the inside workings of rush week, pledge life etc. Of course the lesbian love story is very touching in the light of what’s going on today. All in all this is a rich read. VP

With the introduction of sixteen year old Charlie Wright, Vin Packer
began her career as a suspense novelist. Published in 1953, it was the beginning of her focus on crime. This is not a who-doneit but a why-doneit. Why would a teenage boy from a small town in Vermont kill the beautiful and mysterious owner of the town bookshop? At the beginning of each chapter there were excerpts from the trial, fragments of popular songs,dialogue and verse highlighting the crime,an invention which would be repeated in future crime novels. VP

Die, Mother Dear was Packer’s title for this matricide which Gold Medal figured would have better sales with sin in the title. It was an actual case, two young men killing one’s mother, the infamous Fraden/Wepman murder. The story came from the true details in the trial. The killers were young men, homosexual, and convicted of the crime. VP

What a surprise to come upon The Thrill Kids. I would give it six stars if I could, or sixty, since I wrote it. How did it get here [Amazon], I wonder? Vin Packer [Note by webmaster: Now it is available in e-form.]

Dark don’t catch me was a legendary black saying in Jim Crow days, down South, when it was even dangerous for a black to wear a necktie after dark in the white parts of town. Emmett Till, a teenager from the North, was murdered for allegedly flirting with a white woman, on a visit to Mississippi. The men who did it went free. That was in 1955. Vin Packer’s fictionalized version of the case was published in 1956.Packer’s crime novels were often inspired by the latest headlines. VP

Packer is exposing those racist Southerns again, this time in Bastrop, Alabama, facing the imminent integration of its schools. It is also facing the arrival of one Dee Benjamin, on her return to town, where she once had a hot romance with local editor Jack Chadwick. Reviewers felt the story was overloaded with sex that  even for the South seemed too much. See what you think. VP

This is the story of a lesbian matricide in New Zealand, in the 1950’s.
Threatened with separation, two teenagers decided to kill the mother of one. Vin Packer wrote from the report of the trial, and of course when this book was written no one knew that one of the girls would grow up to be a famous writer. Years later a movie came out
called Heavenly Creatures based on this crime. In real life that girl, after prison, become mystery novelist Anne Perry. VP

And what happened to the crime novel Packer was known for? Publishing executive Charlie Gibson objects to the Confidential-type expose magazine his company is planning to publish. Around the office it’s nicknamed Vile. Reason enough for someone to have murderous thoughts about Charlie. But the reader must not get excited, for this is a straight story that examines Charlie’s life on his 50th birthday. Suburbia like crime is practically non-existent in this unlikely, unlike Packer story. VP

The Girl On The Bestseller List was inspired by Grace Metalious’ bestseller, Peyton Place. Her book was published in 1956 and it sold 60,000 copies in the first ten day. It stayed on the NYTimes  bestseller list for 59 weeks. Packer’s The Girl On The Bestseller List about a woman who wrote a bestseller called Population 12,360, had three printings after it first came out in 1960. Both books exposed the secrets of a small town. In the small town Packer created there were many people who hated Gloria Weldon, star of this novel, but her killer was someone who loved her. VP

Adam Blessing, an orphan, grew up obsessed by Billy Bollin, son of a rich man. Created in 1961 by Vin Packer, he would probably be the only character unsurprised by a rock group that called themselves The Damnation of Adam Blessing. Yes, really. They took the title of the book in 1963. The fictional Adam, strange and destined for a peculiar life in Billy’s shadow, was only repelled by the ordinary, by things that had explanations, by the usual and everyday. Meet him and the women who dared enter his bizarre world.Then try to sleep well thereafter. VP

Something in the Shadows 1961

A Mercedes Benz chases a Siamese cat down the road and kills it. Just another cat run down, nothing unusual about that. Except this particular cat is owned and beloved by Joseph Meaker. He lived in Bucks County, Pennsylvania with his very successful advertising wife. Meaker ponders revenge. He decides the only thing he can do is find out what the owner of that Benz loves most in life, as he loved his cat, and once he finds out what it is, he’ll decide what to do about it. VP

Be sure the coat belongs to you. If you get someone else’s coat, it could be catastrophic, and in this case certainly the wrong time for such an accident. The owner of the coat has just embezzled a lot of money. The finder of the coat dreams of the day he can afford Countess Mara ties, and all the little luxuries that tell the world he’s a man of impotance. They are a strange pair, victims of each other, not intimate by choice but because of an accident that could happen to you or me, they are doomed. VP

Here are two of Packer’s best books. I think Intimate Victims was the one she mentioned in her biography of Highsmith under her own name, Marijane Meaker. I think it was the book she wrote after breaking up with Highsmith. They both wrote books murdering each other.Something in the Shadows, I think, is her best! In that one she used her own real last name! I don’t know why, since she was so prone to use pseudonyms, to suddenly name her murderer Meaker. This is a great get! VP

Almost. But then Packer didn’t write detective stories. Her lead character, Buzzy Cloward, returns to his hometown in New York’s Finger Lakes. He’s just out of prison where he was sent for the murder of Carrie Burr. He ran her down while he was drunk, driving her husband’s car. Slater Burr has since remarried. Now questions about this murder are provoked by thoughts like “How did Buzzy learn to drive a foreign car (Jaguar) so fast that night?” Buzzy’s return to Cayuta, New York, starts people asking questions that perhaps Slater Burr could do without. VP

(Reissued in 2005 by Starkhouse Press)

How did the girl on lover’s lane end up dead in the Thunderbird, and who is the spaced-out college boy beside her? Two New York policeman believe it’s a typical act of violence in these days of casual sex, LSD,and Vietnam. They couldn’t imagine the truth if they tried. Little Arnold Hagerman has a very big problem, one these cops aren’t familiar with, but then who is whose still alive? VP

A Gemini, Vin Packer became interested in the idea
of astro-twins and the theory that anyone born exactly
when you were, to the minute, is your astrology twin.
Such a person will share the same traits with you,
marriage date, habits, as though some behing-the-scenes
force is creating a mutual destiny.Archie Gamble finds
the person with whom he shares a parallel life, and boy
does he wish he hadn’t! VP 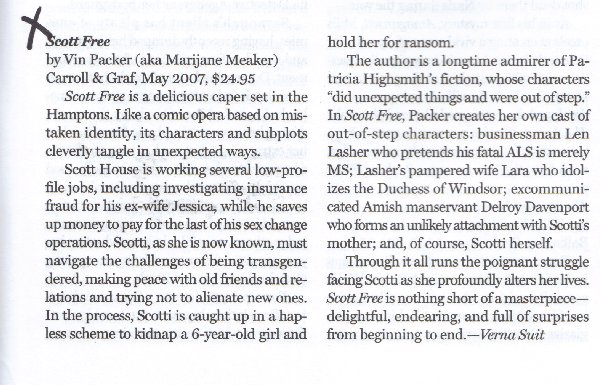 *Thanks to Peter Sieruta.